A volume with a focus on media industries, which I co-edited with Florian Krauß, has just been published as a special issue of the German-speaking journal Navigationen.

You can read our little blurb in English below.  The issue is available for download as open access issue. 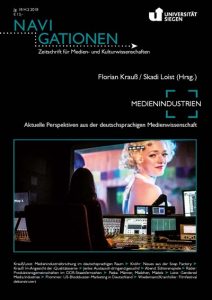 to the center of attention in German-speaking Media Studies. Workshop and conference themes, research projects and links to the international field of Media Industry Studies are clear indicators. Are we on the brink of an “industry turn” in the German-speaking research context?

The previous assessment that Media Industry and Production Studies research is only be an Anglo-American phenomenon seems to be outdated.  This Navigationen issue collects recent work from German-speaking Media Studies and aims to close a gap, which the Media Industries workgroup of the German Media Studies association (Gesellschaft für Medienwissenschaft) has been working against since its inception in 2012.  Including articles by workgroup members, the volume presents research areas such as the German television industry and its serial drama production, film marketing, film festivals, games and radio. Along with historical perspectives, current debates on gender equality are also raised.